Reading as a Writer: “Rasputin’s Daughter”

In Rasputin’s Daughter, Robert Alexander tells the story of the infamous Grigori Rasputin’s famous murder from Maria Rasputin’s point of view and it’s not exactly the story that you may be familiar with.  Alexander makes a plausible case for a disinformation campaign surrounding the murder in order to preserve the Russian monarchy.  With a deft hand, he writes Maria’s voice — the loves, heartaches, curiosity, contradictions, and fears of an 18-year-old on the cusp of adulthood — creating a compelling character that is an engaging guide through this tragic story.

I’ve known Robert Alexander for many years, and I know that he has close ties with Saint Petersburg, Russia.  He speaks Russian.  I’d expect that his research involved digging through historical archives in Russia. He confidently weaves his research and  history into the story, grounding it in fact. His choice of Maria as his point of view character grounds the story in a heart that has much to lose if the rumors swirling around Saint Petersburg in December 1916 are true.  I doubt he could have achieved the sense of urgency or of actually being there with an aristocratic point of view, the Empress Alexandra for example or one of the princes.  We do hear an aristocratic voice in occasional italicized sections, but it’s not clear who it is until almost the end.  Another mystery and point of suspense.  Was Maria actually present when Rasputin was killed? 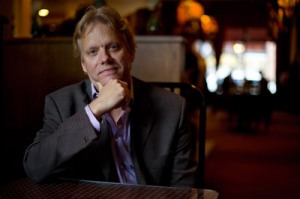 Alexander uses the investigations of the Thirteenth Section, a group charged with investigating Rasputin and all those around him, and poet Alexander Blok’s involvement with them to set up and frame the action.  Blok interviews Maria, questioning her about the truth of Rasputin’s death.  She takes him, pulling in the reader with him, on a journey through her life during the week before her father’s death.  The interview device is not that common in historical novels, in my experience, and Alexander uses it here for a specific effect.  What is the truth about her father’s death?  Will the truth ever see the light of day?  Maria and her questions stand in for the reader.  In Russia, if a rumor circulates long enough, people start to believe that it’s truth and therefore, real information is prized.  Maria’s quest in this story is for real information, the truth behind the rumors.  Alexander does an excellent job of showing the reader Maria’s life and how it changes as she searches for the real information.  He also provides an extremely satisfying ending by returning us to Blok and Maria talking about why she had returned to the city at that time in April 1917.

Rasputin could easily have been a caricature, but through Alexander’s careful descriptions through the eyes of his daughter, Rasputin becomes an earthy human.  He struggles with his own contradictions while he strives to do good in the eyes of God.  His peasant worldview and behavior stand in stark contrast to the Imperial family during the scenes when he’s treating the young Tsarevich.  He does not see the dangers that Maria sees which slowly ratchets up the suspense.  I knew what happened to Rasputin, of course, but I still could not stop reading.  By giving us such well-drawn and human characters, Alexander has given his story depth and richness, and made it  irresistible.  My one gripe is a relatively small one: the repetition of the adjectives greasy, dirty, filthy when describing Rasputin’s hands, hair and beard.  Coming from Maria, it’s surprising.  I almost wished that she’d make more comments about trying to get her father to bathe more or something.

His descriptions of the city in winter as Maria travels with her father or on her own made me want to visit the city again and follow her path.  I loved learning about troikas, horse cabs, and the cars of the time, as well as the network of alleys and courtyards among the buildings.  Alexander does a good job of showing us Maria’s physical surroundings, and the contrast between their living circumstances and the aristocracy’s.  By peppering dialogue with Russian, we hear the culture of the time.

I thoroughly enjoyed Rasputin’s Daughter, especially the insights into the disinformation campaign and the Russian heart, and highly recommend it.

2 responses to “Reading as a Writer: “Rasputin’s Daughter””