Gone Girl by Gillian Flynn has a prominent place on my To Read list, but it’s on my computer and I find it harder to read books on my computer.  I much prefer a print book. (Irony: I published Perceval’s Secret as an e-book, not print.) But I recently viewed the movie of this novel starring Ben Affleck and Rosamund Pike and directed by David Fincher. It was a riveting movie, but challenging in a way I hadn’t expected.

show at double or even triple time. I saw no good reason for this, and I was irritated for a while as the movie began. As the movie proceeded, I liked each of the characters less and less, even the supporting characters like the cops.  Where were the sympathetic characters?  Who was the viewer supposed to relate to, be emotionally invested in?

Whether a movie or a novel, a story stands or falls on its characters.  In anticipation of watching Gone Girl, I had expected to be sympathetic toward the Ben Affleck character more than the Rosamund Pike character, and that’s the way I felt at the beginning. His wife has disappeared under suspicious circumstances on their 5th anniversary.  But he acts distant and cool.

As the story progresses, we learn that Affleck’s character has been unfaithful, that he has a bad temper and has been physically violent (or has he?) Neither of the narrators in this story is totally reliable.  It isn’t until the end that we find out just who is the physically violent one, but by that time, neither of the characters is sympathetic.  And it only darkens more.  I found the ending unsatisfying and far from inevitable.  It was a stretch to make it unresolved.  It was truly unsatisfying to make the cops, who had been smart and on top of everything up until the final act, then timid and back off what should have been an open door to further investigation.  Nothing the Affleck character had done in the previous 5 years could plausibly inspire the Pike’s character’s actions.  Clearly, the Pike character is far more unhinged psychologically than she appeared — and there were only minor clues to this earlier in the story such as her need to be in control. 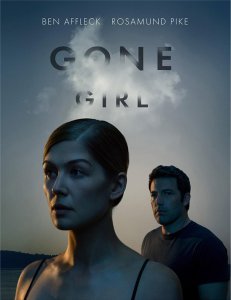 Unreliable narrators are difficult to pull off.  One excellent example of a movie with an unreliable narrator is 1995’s The Usual Suspects. In this story, the writer and director play fair with the viewer, leaving clues to the narrator’s unreliability all along the way.  They also leave clues to the truth. That wasn’t at all the case with Gone Girl. The behavior of these two characters, Affleck’s and Pike’s, seemed as scripted and unnatural as it was.  I have to believe that these two actors tried their best to bring a real life to them, but I cannot say that they succeeded.  The last third of this movie left me alternately skeptical and shocked.  I would have loved a much smarter story in terms of human behavior, that’s for sure.

Unlikable characters do not need to be unsympathetic or unrelatable.  Many villains have captured the hearts and imaginations of movie viewers.  The crucial element for writers to remember is to make their unlikable characters human.  If the characters are not plausible as real humans, the writer will lose readers and viewers, and the characters will just be unlikable cutouts used to send a certain message or accomplish a certain action.  Human characters speak and act like the rest of us, and their behavior is recognizable, whether likable or not.