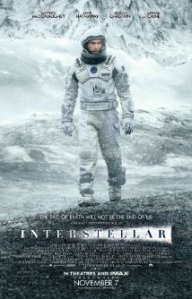 “To act in the best interest of the many rather than the few…or the one.” This notion is a staple philosophy in the Star Trek universe, and it becomes a powerful point of conflict in Christopher Nolan’s movie about saving earth: Interstellar.  In some unidentified future, a blight destroys every crop but corn, it hasn’t rained in ages and New York state has been transformed into a dust bowl where huge, destructive dust storms attack on a regular basis.  Cooper (Matthew McConaughey) and his small family — his father-in-law (John Lithgow), his son Tom, and his daughter Murphy — eke out survival on their corn farm.  Murph has an intensely curious mind that leads her and Coop to a secret installation where Coop encounters a former professor and his daughter. They are quite happy to see him — before farming, he was a pilot, engineer and astronaut.  They need him to help them save earth.

Throughout this movie, Coop’s relationship with his daughter infuses his actions and decisions.  He and his crew are sent through a wormhole to save the world because they want to save their loved ones.  Is that selfish?  Or is it a good way to think of that particular altruism?  It causes several discussions that lead up to important decisions in the second half of the movie.  It got me thinking about the kind of person who gets involved in such an endeavor to begin with. I’m not sure I would be that kind of person, although I’m concerned about helping people.  But to leave the home world to travel to an unknown galaxy an unknown distance away to find a place where humanity could live?  Think about it.  Could you do that?

The science in this movie serves the story and does not overwhelm it.  I had read the long Jeffrey Kluger article in the November 10 issue of Time magazine about who consulted with Nolan about the science — theoretical physicist Dr. Kip Thorne of CalTech, retired astronaut Marsha Ivins — and I was impressed with the results.  However, there was still grumbling from some in my group about the science, which led them to conclude the movie had been badly written, but I disagree.  It wasn’t a movie about the science, it was a movie about the people and a highly risky endeavor.

Having said that, I had questions myself about the Black Hole sequence at the end.  I loved how Nolan incorporated the ideas of simultaneous time and simultaneous space which is about as foreign to us in our 3-dimensional world as one can get.  But the power of gravity at a Black Hole was kind of fudged in a big way, I thought, in order to make the ending work.  To give Nolan credit, however, he set it up very well.  I just didn’t completely buy into it.

On the whole, this movie was superb filmmaking.  Nolan is a master at telling a story through the visual and aural, capturing the human emotion as well as the human motivations that move people to act.  He showed how important relationships are in human life — relationships with people, numbers and equations, dreams, time, space, and ultimately, the universe.  The actors give excellent performances that pull the viewer into the story and keep him or her interested and invested to the very end.  Every story requires a certain degree of suspension of disbelief, and especially in science fiction.  This story is no exception.

Would I recommend this movie?  Yes.  It gets five stars from me, two thumbs up.  Go and open your heart and mind to the possible….